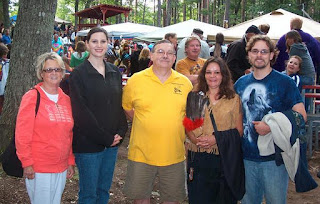 
GEORGETOWN — As an amateur genealogist, Susy Riggle has researched generations of relatives all the way back to before the Civil War.

But one of her most meaningful searches uncovered a woman who isn't related by blood or marriage — her adopted daughter's birth mother.

Riggle found the woman in the fall of 2008 after about a year of searching for her. This past summer, Riggle helped reunite the birth mother with the birth daughter she hadn't seen since placing her for adoption 33 years ago.

"I really believe it was a God thing," said Riggle, who credits God with bringing her daughter — Amy (Riggle) Norman, who now lives in Indianapolis — into her and her husband's lives and bringing Norman and her birth mother together again.

Both lifelong Georgetown residents, Riggle — a retired teacher, guidance counselor and principal in the Georgetown-Ridge Farm school district — and her husband — Rich, a retired coal miner — had a son, Matthew, in 1970. A few years later, after trying unsuccessfully to have another child, they turned to adoption through the Easter House Adoption Agency in Chicago.

Amy Riggle was born on June 27, 1978, in Chicago. The Riggles took her home when she was four days old.

"She was precious," Riggle recalled. "She had dark hair and dark eyes. When my son saw her wrapped up in her blanket he said, 'She looks like a little papoose.'"

The Riggles raised their children on about 30 acres of land 2 miles east of Georgetown that's been in Susy Riggle's family for 175 years. Norman said she had an ideal childhood, growing up in a loving, Christian family with both sets of grandparents nearby.

"I always knew I was adopted, but I never thought anything of it," said Norman, who learned when she was 4 years old. "My mom was a counselor, so she thought it was important to tell me everything she knew, which was two typed paragraphs from the adoption agency. She never spun it like I wasn't wanted. I always viewed it as an unselfish act by someone who knew she couldn't take care of me. Because of that and because I had such a great family, I never felt like I needed to go looking for greener pastures."

The two typed paragraphs didn't reveal much, only that her biological mother was 20 and her biological father was 24. Both parents had dark hair and dark eyes. The back of Norman's adoption decree held one more clue: the name Cadeau.

"We had been told she was French," Riggle said of the birth mother's nationality.

Riggle was inspired to launch a search in the fall of 2007 after meeting a woman who had been adopted through Easter House and recently reunited with a sister. "I always thought if I could do anything to help her find out more about herself or her heritage, I would," said Riggle, who had her daughter's blessing.

With the help of a retired policeman, who was an adoptee himself, and a Massachusetts woman, Riggle got the name of two likely candidates. One was Karen (Cadeau) Andersen who lived on the west side of Michigan's Upper Peninsula.

Rich Riggle had been taking deer hunting trips on the east side for years. So in fall 2008, Riggle joined him, and the two made a side trip to Baraga, where Andersen lived. During their two days there, a librarian found an obituary for a woman named Cadeau, who was a member of the Keweenaw Bay Indian Community in Baraga.

"That's the first time we learned about the Native American connection," Riggle said, adding the woman turned out to be Norman's biological grandmother.

While visiting the local newspaper, the couple tracked down Andersen's cousin, John Cadeau. "He was kind of hesitant at first, but he agreed to let her know we were trying to get in touch," Riggle said. "When we got back home, the phone rang. A woman said, 'I'm Karen Andersen. I heard you've been looking for me.'"

Over the next few months, Riggle, Andersen and Norman, now a mother herself, exchanged phone calls, emails and pictures. Andersen learned that Norman was an exceptional student who graduated in the top of her class at Georgetown-Ridge Farm High School and a standout athlete who set records in volleyball, basketball and track and later attended Georgetown College in Kentucky on volleyball and academic scholarships. She also learned Norman and her husband, Isaac, had a son, Jonah.

"It affirmed her decision to place me for adoption," said Norman, who discovered Andersen wasn't married and didn't have a good job when she got pregnant. "She wanted her child to grow up in a two-parent home, in a home that was religious. She was so happy to learn that I've had a good life."

Norman was equally happy to learn that Andersen is "in a good place." She said her birth mother and her family — who are Ojibwe or Chippewa — moved back to Michigan and reconnected with their Native American community. Andersen married and had a son, Cliff, who's 24. She earned a bachelor's degree, and now works as a wildlife technician for her tribe.

The Riggles first met Andersen, her son and siblings in person at the tribe's annual pow wow in Baraga in July 2009. This past summer, they took Norman and her family — including infant daughter, Elizabeth — and their son, his wife and their kids.

When Norman met Andersen, who was dressed in native attire for the pow wow, she described feeling the way she did when her children were placed in her arms for the first time. "We both teared up, though neither one of us are emotional," Norman said.

That weekend, Norman also got to know her biological brother, an uncle and several aunts, one of whom could pass for her older sister.

"We formed a quick bond," Norman said of Andersen's sister, Denise. "We're both tall and look alike. We played the same sports in high school and college. We also have similar personalities."

Norman said can't help but feel doubly blessed to have her adoptive parents, who "will always be my mom and dad," and this new family, with whom she plans to keep in touch via Facebook. She said she and her husband also hope to visit them every other year or so.

"As my kids get older, I want them to know about this part of their heritage and culture," she said.