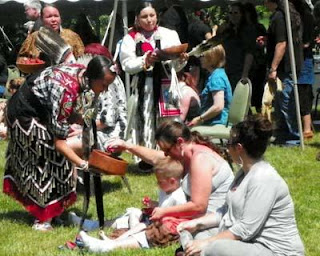 Willie Johnson looked over at the old, crumbling, red-brick building and recalled his grandparents.
They attended the Mt. Pleasant Indian Industrial School, one of many across North America with the avowed purpose of “taking the Indian out of the child” beginning in the late 19th century. Now, in the second decade of the 21st century, the land and the buildings belong to the Saginaw Chippewa Indian Tribe, and Tribal leaders and elders say it’s time for healing.
The Tribe accepted eight acres of property and six historic buildings from the state of Michigan. Monday, a day-long service of honoring, healing and remembrance began the Tribe’s ownership.
Johnson was one of four people who read the names of nearly 150 children believed to have died at the school during the 40 years it operated. Officially, just five children died, but many more are believed to have buried quietly somewhere on the approximately 300 acres of land now owned by the city of Mt. Pleasant and the Tribe.
The aim of the Indian schools was to “enlighten” the Native children, force them to learn English and forget their Native language, introduce them to Christianity and Western values, and teach them useful trades. Many children were forcibly separated from their families and sent to the schools.
Experts say the boarding school experience resulting in the wholesale destruction of Native values and near-loss of Native culture.
The school closed in 1934. The state of Michigan converted the property to a state hospital for the developmentally disabled, which is now closed.
Lorraine “Punkin” Shananaquet, a healer and a member of the Tribal Council of the Match-E-Be-Nash-She-Wish Band of Pottawatomi Indians, said the echoes of the grief, pain and loss continue across the generations.
“My muscle and my blood remember things,” Shananaquet said. She said the day of remembrance could bring emotional, mental, spiritual and physical healing as Native people struggle to regain their language, family, culture and ceremony.
The Tribe has yet to decide how it will use the property. Tribal spokesman Frank Cloutier said the healing and remembrance had to come first.
“Today,” Cloutier said near the end of the ceremonies, “the place is no longer what it was before.”