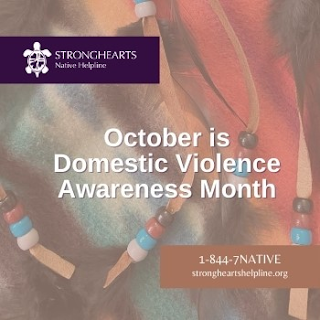 Domestic violence among Native Americans is not natural or traditional. The domination and subjugation of Native Americans began with colonization and continues today. Colonization was responsible for the theft, occupation, pollution and exploitation of Indigenous lands. Today, Native Americans who are living in tribal communities on or near lands that are exploited by extractive industries face the highest rates of domestic and sexual violence.

“StrongHearts Native Helpline is doing its part to raise awareness about this critical issue in our Native communities and to promote healing,” says Jump. “No matter where Native Americans live in the U.S. — on a reservation, in a small town, a rural area, or in a major U.S. city — we are here for you. Please join StrongHearts in believing survivors and victims. Let’s bring our voices together, and take action. Let’s collectively put an end to domestic violence once and for all.”