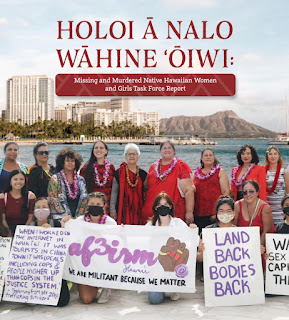 Honolulu, Hawaiʻi — The Hawaiʻi State Commission on the Status of Women honored the national day of awareness for Missing Murdered and Indigenous Women and Girls’ Day on May 5, 2021, and announced that Hawaiʻi State Legislature passed HCR11, which created a taskforce for missing and murdered indigenous women and girls (MMIWG).The state-wide, multi-year taskforce will be co-chaired by the Office of Hawaiian Affairs and the Hawaiʻi State Commission on the Status of Women (Commission). The Apology Resolution, a joint resolution of U.S. Congress passed in 1993, confirmed that Native Hawaiians are an “indigenous people,” which established a “political” relationship between Native Hawaiians and the United Statesgovernment. However, Native Hawaiians have not been included in national research on MMWIG to date.The Hawaiʻi State Legislature Women’s Legislative Caucus included HCR11 in their priority bill package for 2021.

Hawaiʻi State Representative Stacelynn K.M. Eli championed HCR11: “For too long we Native Hawaiian women, like our land, have been commodified. Our bodies and our stories are used and forgotten. This is vital work for us as a State, to provide us with meaningful data to ensure the protection of our most vulnerable population: Native Hawaiian women and girls.”

Unlike other states such as Washington state, Hawaii’s MMIWG taskforce will not be led by law enforcement, but rather by agencies that advocate for Native Hawaiians, women and gender diverse people.

"People ask why is an MMIWG taskforce needed in Hawaiʻi?  Preliminary data shows that Native Hawaiians are disproportionately trafficked into the sex trade, which fuels the MMIWG crisis. From 2017 to 2019, one out of every three child sex trafficking victims reported to the State of Hawaiʻi, Child Welfare Services hotline were Native Hawaiian. In addition, 64% of 97 sex trafficking victims identified in 2019 by Child & Family Services were Native Hawaiian,” said Khara Jabola-Carolus, Executive Director, of the Commission.

“We lose Indigenous girls in Hawaiʻi through many means--through the foster care system, through predators who quietly lure children into human trafficking, and of course through domestic violence.  This issue exists because we do not care about Indigenous women.  We allow unforgivable numbers of women to be murdered in our country and yes, even in our state.  So, we have decided that we need to do something to raise awareness in Hawai`i, and honor the families here whose daughters are missing and murdered.  Today, to raise awareness and support our Indigenous Sisters, we will wear red, with red handprints over our faces to represent their voices being silenced, as we say NO MORE STOLEN SISTERS,” emphasized Stacey Moniz, Maui Commissioner of the State Commission.

Edie Ignacio-Neumiller, Kauaʻi Commissioner of the State Commission stated, “All islands including Kauaʻi will be at the table to interrogate this cycle of violence. There is a crisis of missing and murdered indigenous women and girls and widespread rampant of violence among women and girls.  There needs to be more specific data to find local solutions and locations of MMIWG.”

“This day also provides an opportunity for our government to reaffirm their commitment to stop exploitation of other humans for profit, particularly Native Hawaiian women and girls.  We will address the systemic shortcomings of national and local governments to adequately focus on issues of Human Trafficking that most often leads to Missing and Murdered Indigenous Women and Girls,” said CydHoffeld, Hawaiʻi Island Commissioner of the State Commission. “We will continue to bring public awareness and ongoing island-wide discussions about human trafficking in Hawai’i, through the support and partnerships of the Hawai’i State Commission, and our County Committees on the Status of Women.”

CANADA: ‘This is genocide’: Final MMIWG report says all Canadians have role in ending violence